For those of you that lack the musical theatre appreciation gene, Company is the story of single guy Bobby and his 4 pairs of married couple friends. The musical weaves in and out of scenes celebrating Bobby’s 35th birthday. Seemingly arbitrary yet slightly monumental, 35 is apparently Sondheim’s magic age where you’re absolutely nothing unless you’re part of a pair. Maybe that’s a bit dramatic. Still, the big finale number underscores the point of the entire show; “Being Alive” is all about opening yourself up to finding that person that makes you cringe, laugh, bawl, loathe them, and worship them.

“Somebody need me too much; somebody know me too well. Somebody pull me up short and put me through hell and give me support for being alive. Being alive.”

Other songs continue to highlight the give and take of marriage. When asked, “Are you sorry you got married?” a character replies:

Before I start quoting the entire damn score, I might as well tell you why I’m writing about it. The other night I was invited to dinner with friends. Sounds simple? Well, initially it was supposed to be a double date between two of my best friends that started dating each other (Short Stack and Masters- God, I have to update these nicknames) and Patches and his girlfriend. It ballooned into a four couple date including two pregnant friends and their hubbies. At that point, Patches figured he might as well include the single folks and sent the invite to Captain and myself.

Captain was going to see a musical with his fam. He profusely repeated how much he would loathe the experience, but I’m convinced he secretly loves going to see shows with his family and puts on a too fucking cool act. Yeah, I said it. Real men love Broadway, bro! Anywho, point is he couldn’t go. The remaining parties were the four couples. And me. I was Bobby in Company. All I needed was a hat, cane, and a really good choreographer. 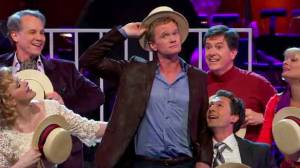 I initially told everyone I was going to bow out because, fuck that shit. On the other hand, I really enjoy restaurant food and I was running out of Luke Evans movies to watch. There’s only so much drooling I can fit in on a Saturday night. After much texting back and forth and me being a little bitch (“You’re sure you won’t mind? Oh, ok. No, I know I’m being silly. Haha. Ha. Ha. Want me to drive? Oh no, that’s fine. I’ll meet you there. It’s fine, really! Fine! FINE! SEEYOUATTHERESTAURANT. :))))) :heartemoji:”) The place was 20 minutes away, but it didn’t help that there was 2 inches of winter slush on the roads and dreary freezing rain pummeling through the air. The perfect night for driving solo to a big fat family gathering.

The restaurant was a cool neighborhood bar and grill that was well lit and had a huge menu. You can gauge my spirit age directly from that previous sentence. It was a mix of bar hoppers and young families, and of course I got there first and stood on the side like a dweeb. I wore jeans, pearls, red lipstick, and my glasses. A nice mix of trying way too fucking hard and just rolled off the couch. Of course I whipped out my phone and played 18 rounds of trivia crack, desperately trying to look like I didn’t care that I was standing alone on the side of the bar. The couple procession finally arrived and began to take their seats. I sat at the head of the table, obvi. I learned a lot about pregnancy, babies, diapers, breastfeeding, the multitude of hospital visits and blood tests you must endure while pregnant, what you cannot eat while pregnant, what you don’t want to eat while pregnant, and basically how fucking miserable being pregnant is. I tripled my dose of Beyaz and washed it down with eight diet cokes, trying to sympathize with my preggo friends by abstaining from alcohol.

Neuroses aside, it was a great night. Conversation was great (albeit terrifying), dinner was delicious, and it was nice to be an “adult” for a change. We capped off the night by watching NFL at Patches’ girlfriend’s condo, where Captain joined us post-show. My insecurities convinced me that the odd number of guests would make me feel awkward and alone, and it entirely overshadowed the most important thing: these people are my good friends. I’ve known some of them since high school. I’ve seen them get advanced degrees. I’ve seen them totally fucking embarrass themselves. So what if they’re all paired off? Sure, some day they’ll have families and we’ll have less and less time to grab a table for nine. Still, if the friendship is legit, there’s always a chair for the dog lady aunt who always travels and has a cool car, and could be described as wacky, but is just really freaking cool. I hope I’m cool, anyways.

I am Bobby. I’ll sing Being Alive someday. Til then, I’d rather sit at the head of the table and entertain my friends with tall, fantastical tales of the single life.

About I Make Bad Decisions

Law school dropout. Lover of all things Disney. Making bad decisions daily for your enjoyment.
View all posts by I Make Bad Decisions »
« 2015: Screw You, Back to the Future II
The Moth Complex »

Law school dropout. Lover of all things Disney. Exploring the vast wildlands of New Jersey and recording every second.